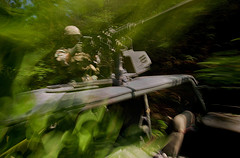 I am so tired.  I was able to catch 15 minutes of nap time here and there this morning, but it isn’t like it was when I was 20 and 15 minutes felt like a couple of hours sleep when we were on maneuvers at Fort A.P. Hill in Virginia.

David has been going pretty much non-stop since yesterday. I had a brief respite from him when he was asleep for about three hours, but… I wasn’t asleep.  so I have been awake for the most part since yesterday.  Thankfully my daughter is going to be my eyes for a while this afternoon so I can sleep a bit.

I am due in Denver for three days at the end of the week, and we have family coming to stay with the kids while I am gone.  So since David is actively non-compliant with his meds, I will be putting him back in the hospital tomorrow.  I would do it today, but I need him to be there thru Friday.  We will have to see how the afternoon goes.

Trouble with that is, they only keep him long enough to get him stable on his meds again.  Last night he threw up his meds three times.  And the last two times he did it, I had no idea until I confronted him about it.  See, 20 mg of melatonin should pretty much knock him out.  I gave him 40 mg over three hours and he still hasn’t slept.

To read about a family similar to ours, check out Lost and Tired

1 thought on “so tired. hospital again”